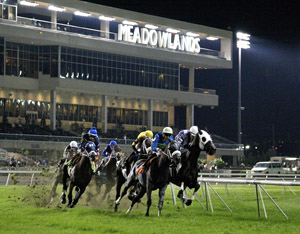 Awesome Quick benefitted from an alert break from the outside post and was never headed, going on to a 1¼-length victory over Nellysford in the co-featured $28,000 allowance during Saturday night’s Monmouth-at-Meadowlands card in East Rutherford.

The 6-year-old mare, trained by Mike Miceli and ridden by Hector Diaz, Jr., covered the five furlongs over a turf course listed as “yielding” in :59.52.

The New York shipper won for just the second time in 26 career grass starts. She paid $13.80 to win.

That sprint win was in stark contrast to the neck victory by Mutabaahyia in the co-featured allowance at a mile and a sixteenth over a course labeled “soft” at the time, with the Michael Pino-trainee roaring from last to catch Tearless in the shadow of the wire.

Ridden by Chris DeCarlo, Mutabaahyia won for the second time in three career starts, covering the distance in 1:47.46. The 3-year-old filly, owned by Shadwell Stable, is a daughter of Animal Kingdom-Thaminah by Danzig.

The abbreviated all-turf Monmouth-at-Meadowlands meeting wraps up next Friday and Saturday, Sept. 28 and 29. Post time is 7 p.m. both nights.