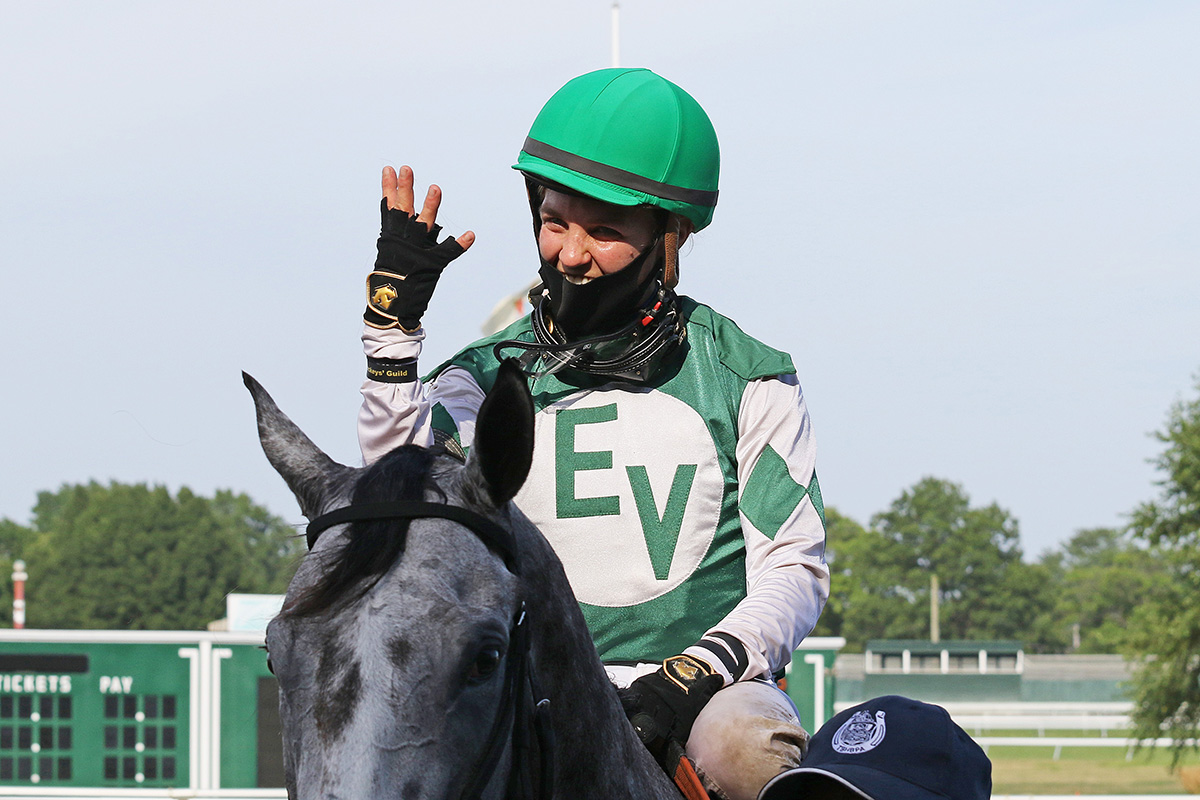 The hints were there that something special was going to happen for apprentice Ferrin Peterson, Julie Krone said. Her work ethic, the way horses seem respond to her, the increased experience she has gained by riding all summer at Monmouth Park – all were tell-tale signs, she said.

So the Hall of Fame rider-turned-jockey-agent was not the least bit surprised when Peterson, whom she represents, won four of the 10 races last Sunday at Monmouth Park, giving her 12 winners from 64 mounts heading into Friday night’s six-race twilight card.

“It’s the way horses respond to her that you notice right away,” said Krone. “They seem to find another gear for her. They just run for her.”

Peterson, 28, now finds herself in the midst of what looks to be a hotly-contested race for the second spot in the track’s rider standings behind runaway leader Paco Lopez (30 wins). She’s right there with accomplished veterans Antonio Gallardo (15 wins), Joe Bravo (13) and Jose Ferrer (12). Hector Diaz Jr. is also part of that logjam with 12 wins.

“I’m very pleased with the way things are going,” said Peterson, who is listed to ride in four of the six races on Monmouth Park’s Friday card. “It feels like I am starting to pick up momentum. The trainers here have really helped me get started. Pat McBurney let me gallop for him when racing was postponed here for two months because of COVID-19. It feels like it was a long wait to finally get started in July.

“It just has been a really weird start. Not having Julie on the backstretch, where she could have really helped out business get going, was a bit of a setback, too. So I was unsure of how the meet would go. But I’m very happy with the way things have gone since the racing started.”

Peterson, a licensed veterinarian, is a latecomer to riding, turning to the profession full-time a year and half ago. Krone says her intelligence and willingness to learn are two of her biggest strengths.

“We’re superstitious at the racetrack so I’m afraid to say too much because you know you will jinx it,” said Krone. “But she has never made the same mistake twice. All I have to do is show her a video or explain a technique and she gets it immediately.

“Her other big strength is that she communicates with the horses. And there is never any hesitation to accept instruction or a correction. She is totally into her development as a jockey.”

Peterson said she is always tugging at Krone to show her more when it comes to technique or the nuances of riding.

“I told Julie as long as there is something I can improve in my riding each week I want to work on it so the trainers can see I am trying to improve and that I have the work ethic – even if I am not winning,” she said. “Last Sunday there were a few things that Julie worked on with me that just really clicked with me.

“People want to see numbers, so riding four winners on a card was significant to me. Getting longshots to run second and third is good but trainers and owners want to see wins.”

The California native and former college pole vaulter has never shied from hard work, at one point juggling college schoolwork and being a track athlete while also trying to make inroads on her goal of being a jockey as he worked toward veterinary school. That work ethic has carried over to her constant presence in the backstretch and working with Krone on dark days.

And finishing second to Lopez, she says, would be a major achievement this early in her career. Lopez is seeking his seventh riding title at Monmouth Park.

“I do definitely think it’s possible (to get second),” she said. “We’re only halfway through the meet. Now that things seem to be connecting that’s definitely my goal – to chase second. And, really, to chase first. Who knows? Anything can happen.”