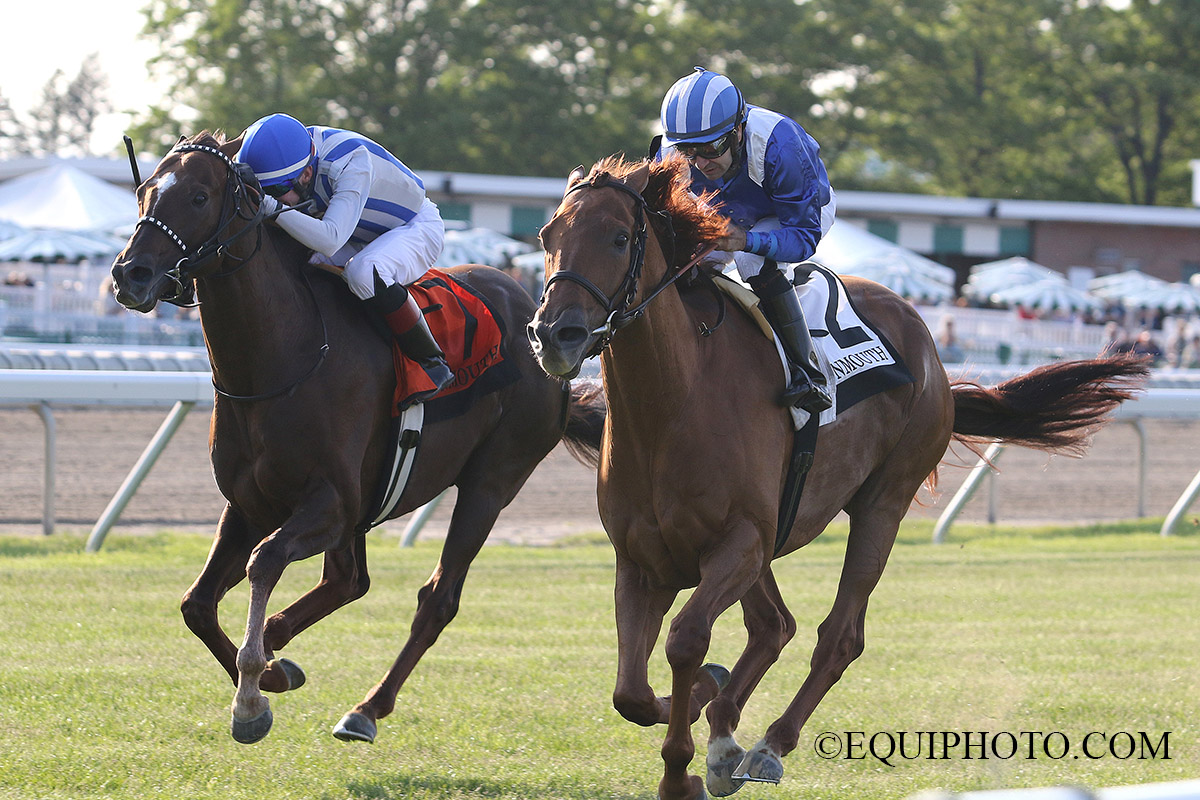 Trainer Chad Brown’s hopes for a repeat in the Grade 1 United Nations on June 22 at Monmouth Park will apparently fall to the brawny shoulders of Almanaar.

The muscular 7-year-old gelding shook off the rust from a five-month layoff to score a neck victory over Synchrony in the Grade 2 Monmouth Stakes before a crowd of 17,309 on Saturday, with Luis Cabrera, Brown’s assistant, saying the United Nations is the next target for Almanaar.

Ridden by Joe Bravo, Almanaar made an explosive move on the backside to rush from seventh place to second, then held sway over a late-charging Synchrony and jockey Trevor McCarthy in the stretch after assuming command in the mile and an eighth grass race.

Owned by Shadwell Stable, Almanaar returned $6.80 to win. He covered the nine furlongs over a turf course listed as “firm” in 1:45.75.

“He has been training very well at Belmont, so even though he has been off we expected him to run well,” said Cabrera, who oversees Brown’s stable at Monmouth Park. “Chad liked this horse a lot in this spot. He’s a runner, a real classy horse.”

Brown won the United Nations a year ago with Funtastic. He also captured the race in 2015 and 2013 with Big Blue Kitten.

Almanaar and Bravo survived a claim of foul from McCarthy, with the objection dismissed by the stewards.

“He’s such a big strong horse – he’s a beast, really,” said Bravo. “I didn’t want to make that big middle move but he was fresh and wanted to do it and he’s so strong I didn’t want to get into a tug of war with him.

“If you saw him in the post parade he was ready to run. I thought if I tried to fight him down the backside when he made that move I was just going to take more energy out of him. I was trying not to fight with him.”

Bravo acknowledged that his horse did “drift a little in the stretch” but said that “it wasn’t anything major.”

“By the time (Synchrony) got up to us he had straightened himself out,” he said.

It was another 4¼ lengths back to Force the Pass in third.

The graded stakes victory was the second for Almanaar since Brown took over the training responsibilities for him in 2016. The son of Dubawi-Baqah by Bahhare also won the Grade 1 Gulfstream Park Turf Handicap in 2017.