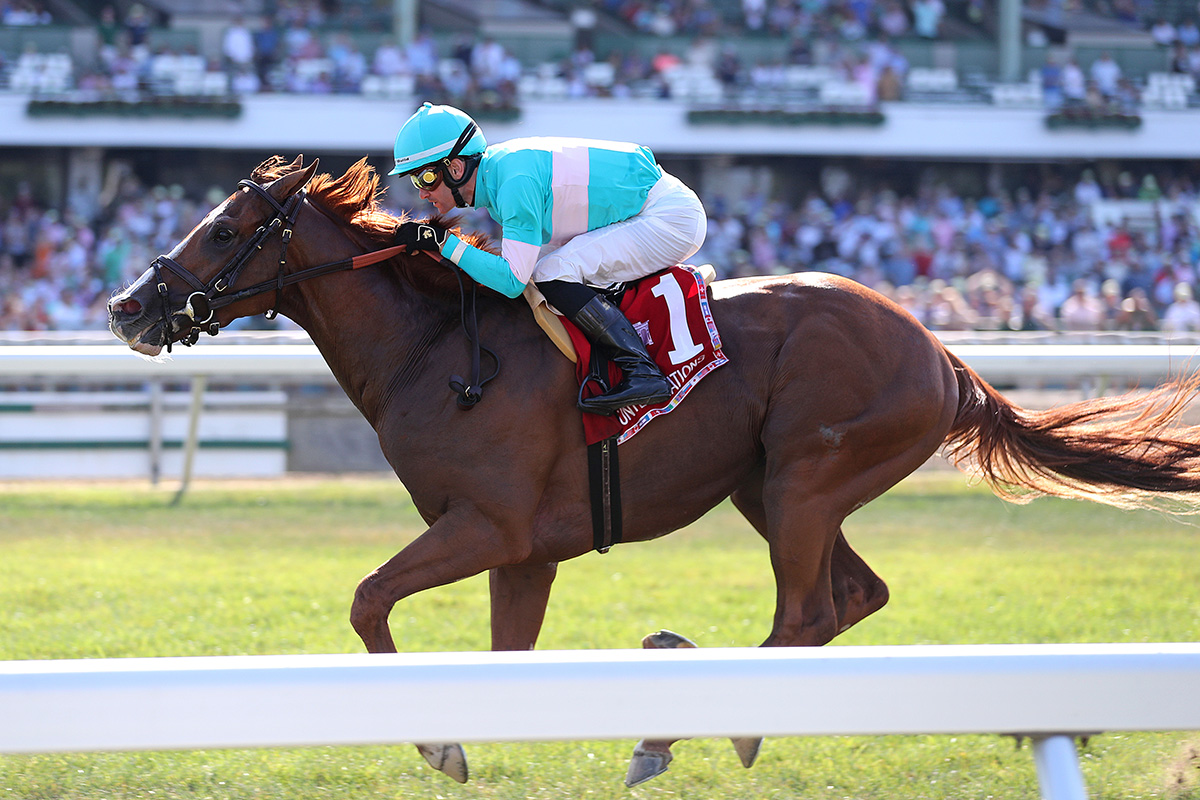 Pletcher won five races on the 2016 Haskell card but not four straight stakes, as was the case with Brown.

Adhamo, who had been third and second in two previous Grade 1 stakes, finally broke through for his top-level score. The 4-year-old colt owned by Madaket Stables, Michael Dubb and partners, came from off the pace as the 9-5 favorite to run down tiring stablemate Tribhuvan the 2021 winner of the United Nations. The locally-based Epic Bromance, who was sent off at 72-1 and was the longest shot on the tote board was 1½ lengths back in second. Temple took third, another head back.

“He’s been a little unlucky this year.,” Brown said of Adhamo. “He’s still a little bit of a work in progress. I’m still trying to figure out what his best distance is, and ground and such. I was pretty confident going in to today that if he was able to get out in the clear and with a little bit extra ground to work with that he could run down a horse as good as Tribhuvan, and he did. He’s a pretty talented horse. We’re still figuring the horse out.

“(Jockey) Flavien Prat worked out a beautiful, patient trip. It’s not like he had a fast pace to run into today either, so he earned this win today.”

In the supporting stakes on the Haskell Stakes card:

The 4-year-old Highly Motivated, ridden by Flavien Prat, rated off the pace of his stablemate and then made a sweeping move leaving the backstretch to run by Pipleline in the lane and prevail by 1¾ lengths in 1:46.53 on a fast track. Informative took third, another 2¾ lengths behind.

Spend A Buck set the old track record for the distance in 1985.

The win was the first in a graded stakes for Highly Motivated, who competed on the 2021Triple Crown trail to no avail. Brown sent him to the sidelines to find his legs again, according to Brown, who added that it’s taken this long for the horse to realize his potential.

Highly Motivated is by Into Mischief and with the win upped his record to 4-2-1 in nine career efforts. Sent off at 4-5, he returned $3.60 to win.

Klaravich Stables’ multiple graded stakes winning Search Results, trained by Chad Brown, asserted herself as one of the best in the Filly & Mare division with a dominating performance in the Grade 3 Molly Pitcher Stakes as she powered through the lane for a three-length victory.

Ridden by Flavien Prat, the 4-year-old filly took the lead in the far turn and then sailed clear to the wire to cover the mile and a sixteenth on a fast track in 1:40.47. Leader of the Band was the runner-up, finishing 1 3/4 lengths ahead of Army Wife. Search results returned $3.20 as the prohibitive favorite in the field of seven fillies and mares.

Brown said that Search Results will be pointed to the Breeders’ Cup Distaff in the fall.

Lemista, who is trained by Chad Brown and was ridden by Flavien Prat, rated off the pace in the 1 1/8 miles turf race, took the lead heading for home, and dug in late to repel a charge from her fast-closing stablemate Fluffy Socks and cross the wire a half-length in front. Vigilante’s Way finished took third by a neck.

Lemista covered the nine furlongs over firm turf in 1:47:07. Dispatched as the fourth betting choice in the field of eight fillies and mare, she paid $11.20 for a $2 win bet.

The top three finishers will be awarded a season to WinStar stallions Global Campaign, Tom’s d’Etat, and Improbable.

Breakthrough, who is owned by RT Racing Stable and trained by Juan Avila, broke through in the $100,000 Wolf Hill Stakes to win the first stakes race of his career and post the upset under Samy Camacho.

Breakthrough, a 4-year-old gelded son of 2016 Kentucky Derby winner Nyquist, covered the 5½ furlongs over firm turf in 1:00.99 to finish a half- length in front of Belgrano in the eight-horse field. Admiral Abe was third, another 1½ lengths behind. Graded stakes winner The Critical Way, who won the Wolf Hill last year, finished fifth as the even money favorite.

Breakthrough, who won his second straight 5½-furlong sprint on the Monmouth Park turf, returned $34.80 to win. He improved his record to 4-3-0 in 13 starts.