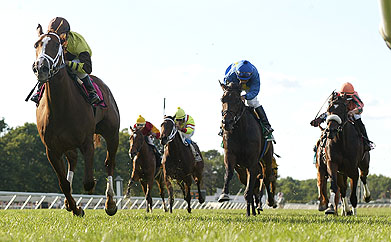 Trainer Chad Brown brings a trio of horses to Monmouth, led by the top two finishers of the Grade 1 Man o’ War at Belmont Park on May 14, Wake Forest and Money Multiplier, the former being the victor.

The third of Brown’s horses, Mr Maybe, is making his second start of the year off a third-place finish in the Grade 2 Mac Diarmida Stakes at Gulfstream Park on March 5. Prior to that, Mr Maybe finished his 2015 campaign with a four and a quarter length win in the Grade 3 Red Smith Handicap at Aqueduct on Nov. 14.

Mark Casse brings World Approval to the Jersey Shore off three straight graded stakes races, including a third place finish in the Grade 1 Manhattan on June 11.

Locally based Jason Servis, who has been winning at a 38% clip this meet, will send Riviere Du Loup to the starting gate for the U.N. The 6-year-old by Ghostzapper out of the Caerleon mare Volga found the winners circle in his inaugural try over the Monmouth turf in his last start, an allowance optional claiming event on May 21.

Inaugurated at Atlantic City Race Course in 1953, the United Nations is one of two Grade 1 events at the Monmouth Park meeting, the other the betfair.com Haskell Invitational, to be renewed for the 49th time on July 31.

The full field for this year’s 65th U.N., with rider assignments, from the rail out:

4:52 p.m. Gates open at 11:30 a.m. with first post at 12:50 p.m.All paid admissions to the racetrack on Sunday will receive a commemorative canvas print of American Pharoah’s victory in last year’s Haskell Invitational.