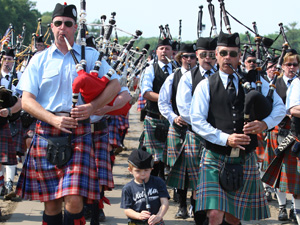 The popular Irish Festival will hold its 48th renewal at Monmouth Park on Sunday, June 10, to complement a live racing card. Gates open at 10 a.m., with a traditional Irish Mass set for 11 a.m. on the paddock side of the grandstand on the second floor.

The day will include an Irish Band and Dance Competition, a Pipe and Drum Competition and a human horse race. Irish flags will be displayed and the Irish national anthem will be played at 11:55 a.m.

A variety of Irish food will be available and a beer area will be set up in the grandstand overhang and in the bus lot.

Also on Sunday, former Monmouth Park leading ride Julie Krone, the only female to win a Triple Crown race, will be available for autographs from 1:30 p.m. to 3:30 p.m. near the Jockey’s Room. Krone won the 1993 Belmont Stakes aboard Colonial Affair and was the first woman to win a Breeders’ Cup race. Elected to the Racing Hall of Fame in 2000, Krone topped the Monmouth Park rider standings from 1987-89.

Sunday is also a Family Fun Day, with pony rides, clowns, face painters and a bounce house available for free to children 12 and under.