2-Year-Olds Take to the Track Friday at Monmouth 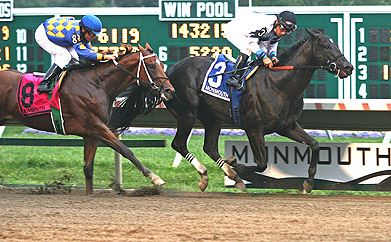 The first set of 2-year-olds are set to go at Monmouth Park this Friday as the track plays host to a pair of maiden events, one for colts and geldings, the other for fillies.

The first set of youngsters will be the colts and geldings, who go in the day’s opener at 12:50 p.m.  A field of seven is entered with Noble Dave, Follow the Rainbow and Bay Numbers perhaps the trio who standout most based on pedigree.

Noble Dave, who breaks from post two, is by High Cotton from the Songandaprayer mare Sing That Song, making him a half brother to 2012 Grade 3 Sapling winner Brave Dave, who was also trained by Eddie Plesa Jr.  Noble Dave sports a trio of Monmouth Park works, including a bullet, in preparation for his debut Friday.

In terms of breeding, Follow the Rainbow, a New Jersey homebred from New Farm, certainly should like the track.  A colt by Henny Hughes, Follow the Rainbow is out of Rainbow Pride, a stakes runner-up herself and the mother of Rainbow Heir, winner of the 2013 Grade 3 Jersey Shore and a pair of other stakes events over the Oceanport strip.

Morning-line favoritism at 2-1, however, belongs to Bay Numbers, who also goes for Eddie Plesa.  Set to start in the colors of Live Oak Plantation, Bay Numbers sold for $180,000 earlier this year and is out of the stakes winning mare Zawzooth.  The colt by Algorithms has the services of the meet’s top rider Paco Lopez.

Three races after the boys go, it’s the girl’s turn, with a field of nine entered.

Once again, Eddie Plesa’s runners look like solid debuters as Show Me Mo and Misschief Maas have drawn the two outside posts.

Show Me Mo, by Uncle Mo is out of a multiple stakes winner at four and five – Joyful Wager.  The $115,000 purchase will go in the colors of Karl and Cathi Glassman with Lopez in the irons.

Just to her outside will be the Laurie Plesa color-bearer Misschief Maas, a daughter of Yes Its Legal from the Forest Camp mare Forest Retreat, who is the mother of Flay Mignon, last year’s Colleen winner on Monmouth turf.

Trainer Todd Pletcher will send out Nonna Mela, a $310,000 buy earlier this year.  This daughter of Arch is from the Storm Cat mare Cool Storm, who sold at auction as a yearling for $1 million.  Her dam is She’s a Winner, mother of 2009 Haskell winner and Kentucky Derby runner-up Bluegrass Cat.

The morning line favorite in the fillies event goes to the Kelly Breen trained Day by Day, runner-up in her debut at Gulfstream on April 28.

There is no mistaking the resume that Monmouth Park maiden races have for jump-starting the careers of some talented horses. Since the 1960s, eight champions and a host of major stakes winners have gotten their start right here.