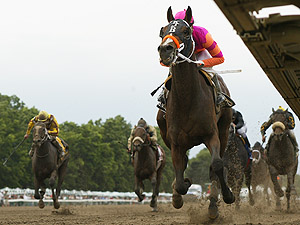 Eight days after 2-year-old fillies contested the first baby race of the season at Monmouth Park the boys get their chance during Sunday’s 11-race live program.

Six 2-year-old colts and geldings – two apiece trained by Kelly Breen and Chuck Spina – are scheduled to make their career debuts in the 4½-furlong Maiden Special Weight race that kicks off the card.

Breen has entered the aptly-named Biletnikoff, out of the mare Raiders Fan, and Babbo Babbo Babbo. Spina will send out My Only Sunshine, a full brother to 2017 Colleen Stakes winner and multiple stakes winner Bronx Beauty, and Tenzip Funzi.

The Jason Servis-trained Sports Betting, owned by Dennis Drazin, is also in the field.

“Both of these horses are the most forwardly advanced out of the gate of the 2-year-olds I have right now and they’re both precocious enough to race,” said Breen, second in the Monmouth Park trainer standings entering the weekend with 11 winners. “Babbo Babbo Babbo is a little quicker out of the gate but you never know until they get out there and race. Biletnikoff is a Jersey-bred and whether he needs a race or not I don’t know. The main goal for him is to run in Jersey-bred races.

“But he’s ready to go now so we’re going to run him in open company. He seems to be a nice horse.”

Spina said both of his horses “are training pretty well.”

“Tenzip Funzi worked 48.2 out of the gate. He acts like a nice horse,” said Spina. “My Only Sunshine is really coming around. But a lot of them show ability in the morning. They have to do it on the track. That’s the only way you find out.”

Spina, who has seven 2-year-olds, said the baby races always bring out the optimism in trainers, even the most hardened veterans.

“This is what it’s all about, to maybe get a nice one,” he said. “With 2-year-olds you can dream a little.”

Krone, who topped the Monmouth Park jockey standings from 1987-99, will sign autographs from 1:30 to 3:30 near the Jockey’s Room. Family Fun Day offers free face paining, pony rides, clowns and a bounce house for children 12 and under.

To accommodate the day-long festivities involved with the Irish Festival and a traditional Irish Mass that starts at 11 a.m. on the paddock side of the grandstand on the second floor, gates will open at 10 a.m.